The August issue of the Allen County HamNews is now available for download using the link below.

Minutes of the July, 2019 general meeting of the FWRC are available for download using the link below.

The June, 2019 issue of Allen County HamNews is available for download using the link below.

A flyer is available to help promote the FWRC’s 2019 Field Day operation. Use the link below to download the flyer, then print out and post as many copies as you wish!

The June, 2019 issue of Allen County HamNews is available for download using the link below.

The May foxhunt occurred on Sunday the 5th of May, which turned out to be a beautiful spring day in Indiana, temperatures in the high 60’s and a blue sky. Wow!

There were three hunter teams for this one. The first consisted of Jim & Annie Pliett, K9OMA and KA9YYI, plus Carole and Al Burke, WB9’s RUS & SSE. The second team included Steve and Linda Nardin, W9’s SAN & LAN plus their grandson Alex (who was celebrating his 21st birthday). And the third team included Don Glick, K9LI and his wife Julie plus her dad Ed.

Charles Ward, KC9MUT and Phil Hooper, AB9IZ served as the fox for this hunt. They ensconced themselves near the ball diamonds at Rockhill Park in west central Ft. Wayne. They attached a magnet to the microfox and affixed it near the bottom of a steel fencepost that bordered a tree line in the park. It emitted about 40 milliwatts of cw for one minute every two and one half minutes on the 146.430 MHz fox frequency. For the high power fox they used a yagi up about 20’ and driven by Charles’s mobile transceiver with the yagi pointed at some high tension lines. As usual the high power fox transmitted for one minute every five minutes.

In May of 2019, we migrated the FWRC website from a very outdated version of the Joomla content management system (CMS) to an up-to-date version of WordPress CMS. No data… Read more » 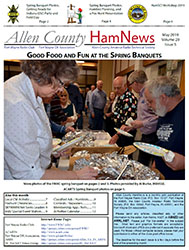