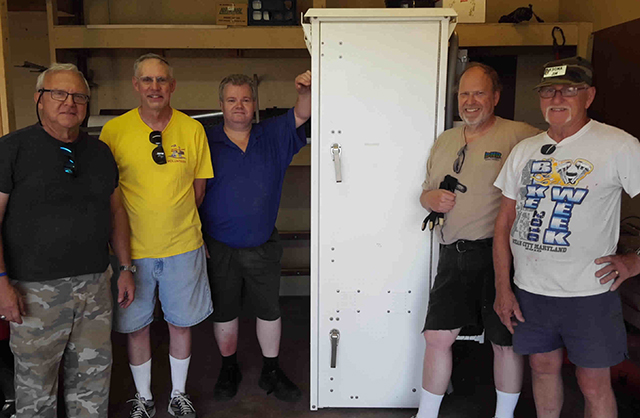 The Outside Enclosures Inc. repeater cabinet donated to the club by Peters Broadcast Engineering, Inc. was hauled out to its temporary home at Jim Pliett, K9OMA’s garage by erstwhile furniture movers Al Burke, WB9SSE, Steve Nardin, W9SAN, Fred Van Kempen, KA4YBR, Bruce Dennis, N3QKX, Jim Pliett, K9OMA and Tom Rupp, KU8T. This crew managed to get the thing moved without smashing any fingers or toes. (The Enclosure and its base plate are HEAVY).

The enclosure will remain out at Jim’s QTH while it is prepared for installation at its ultimate home, the WLDE-FM site out on Parrott Rd. where it will house the 146.940 repeater, and potentially the club’s D-STAR uhf repeater.

Meanwhile, work continues on preparing the club’s recently acquired Yaesu Fusion repeater which will be used on 146.940. On Wednesday, July 20, Al Burke and Tom Rupp took the Master II system at Parkview/State Blvd. out of service and replaced it with the club’s Motorola repeater which was programmed for the 146.340/.940 MHz frequency pair, and can be used as a back-up machine at any of our sites. (It contains a built in controller). This was done in order that the CAT-1000 controller could be removed from the Parkview site and made available for integration with the Fusion repeater currently located on KU8T’s bench.

When integration of the Fusion machine and the CAT-1000 controller is accomplished the system will be checked out on Tom’s bench and then it will be moved to Parkview and put on the air. At this point it will be able to operate as a standard analog-FM machine or in the digital C4FM-CDMA mode.

The next steps in this progression include finalizing and signing-off the lease agreement with Sarkes-Tarzian regarding the Parrott Rd. site (we are still working with Sarkes-Tarzian Legal to get this accomplished), and deciding whether we install two feedlines on the tower (7/8” heliax for the vhf system and 1 5/8” heliax for the uhf system), or just employ a single 1 5/8” feedline and use a diplexer at the top and bottom of the tower.

Once the lease agreement is signed-off we will then purchase feedline(s), antenna(s) and other paraphernalia, hire the antenna climbers, and turn them loose. We will also move the enclosure from Jim’s QTH out to the Parrott Rd. site and install it. Following this we will move the 146.940 machine from Parkview to Parrott Rd. and begin operation out there at 280 feet!

So stay tuned as the excitement continues.