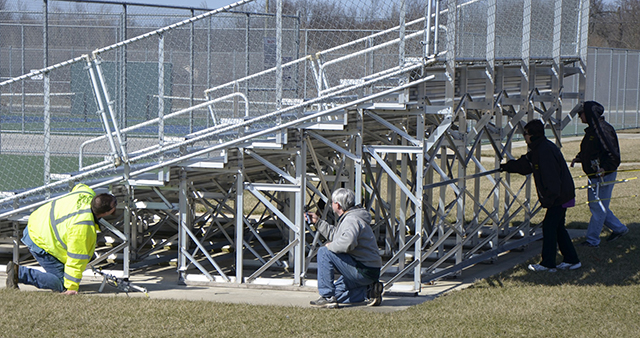 The second foxhunt of 2018 occurred on 4 March, 2018 on a brisk but sunny afternoon. Three teams arrived at the starting point at Cobin Memorial Park in anticipation of the hunt beginning at 13:30 hours. The first team included Charles Ward, KC9MUT, Fred Gengnagel, KC9EP and Kevin Loughin, KB9RLW. The second team included Steve and Linda Nardin W9’s SAN & LAN. And the third team consisted of Don Glick, W9LI and newcomer Rudy Wilfong.

The fox function was provided by Jim and Annie Pliett, K9OMA & KA9YYI plus Carole and Al Burke, WB9’s RUS & SSE. They located the high-power fox on the grounds of Carroll High School off Carroll Rd. just west of the Carroll High School Natatorium. It pumped about 30 watts into a cubicle quad mounted on the roof of Jim’s van.

The microfox was the standard microprocessor-driven CW transmitter producing about 10 milliwatts into a monopole. Ultimately, the microfox was hidden under one of the seats in the tennis court’s aluminum bleacher stands in such a way that it was almost impossible to see.

But before they hid the fox, Jim and Al, having been witness to the evil shenanigans perpetrated in past hunts by the Ward/Gengnagel team when they were the fox, and goaded on by Carole and Annie, thought they’d have a little fun by attaching the microfox to Jim’s fancy new quad copter and flying the quad copter and active microfox about 100 feet above the tennis court for about five minutes, shortly after the hunt started. They hoped that the hunters would hear it and think they were right on top of the fox when in fact they were still miles away. But alas, none of the hunters heard the microfox, so the Ward/Gengnagel gambit, as Jim and I liked to refer to it, didn’t work. (After the fact, when I described what we attempted to Charles and Fred, I noticed subtle but evil grins forming on their faces).

It took a while for the hunters to wend their way to our hideout and localize the fox. Steve and Linda were first to arrive on the scene followed by Charles, Fred and Kevin.

As I understand it, Don was employing a new handheld yagi (out the door window of his vehicle) and was not able to localize us by the time everyone else had found the microfox, so he elected to not complete the hunt.

The hunters crawled over, under and through the bleachers trying to find the microfox which was very difficult to locate because of the design of the bleacher seats. All during their search the hunter’s efforts and frustrations were captured in video by Kevin Loughin on the ground and captured from the air by Jim Pliett via his quad copter. Kevin is planning to produce a video featuring foxhunting on You Tube for everyone’s edification. You can check out the foxhunt video he captured at:

Jim Pliett is planning to show the video he captured with his quad copter at the Fort Wayne Radio Club March meeting on Friday, 16 March at the Good Shepherd United Methodist Church.

As it turned out, Kevin was the first to find the microfox’s hiding spot, and he was followed by Steve Nardin. Thus Kevin (and Charles and Fred) will serve as the fox for the April hunt, and we can expect Kevin to film another video during that hunt that will show fox hunting from the fox’s point of view. Should be interesting.

Following the hunt, we bopped over to the I-HOP at West Washington Center and Lima Roads to enjoy a well-deserved meal. Some had pancakes, some had a salad, some soup, and some a sandwich. But everyone enjoyed themselves.

The scores from this month’s contest and for the year to date are as follows: