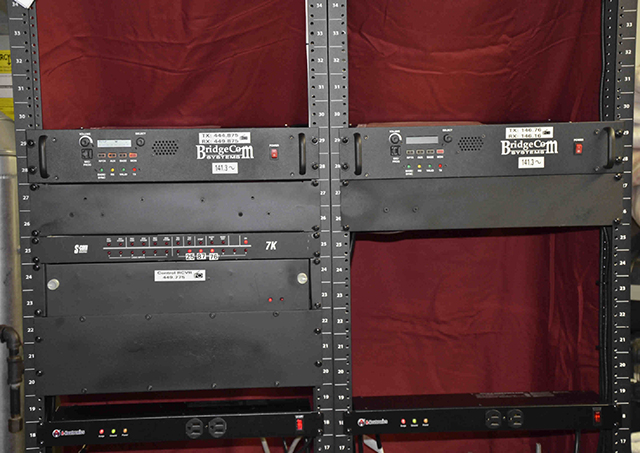 Well, they always say no good deed goes unpunished, and such seems to be the case with the BridgeCom Systems BCR50V repeater at Robison Park that forms the basis of our 146.16/.76 machine. We installed this hardware at Robison Park (and a similar UHF version of the machine for 444.875 MHz) over a year ago, replacing the GE Master II hardware that had previously served as our Robison Park hardware.

The BCR-50V is a modern micro-processor based system that provides state-of-the-art repeater capability features upgradeable by virtue of it being micro-processor based.  The system we installed was one of the first units developed by BridgeCom and so incorporated an early version of its operating system.  Several revisions to this software have been released by BridgeCom, and installed in our system as experience over time with the system revealed bugs, a process common with the maturation of new hardware.

Paul Prestia, KA3OPZ received a new version of software from BridgeCom after discussing things noticed by Paul, and by BridgeCom, at the Dayton (Xenia) Hamfest.  Paul just recently installed the (new software) upgrade to the Robison Park (146.76) hardware which caused the 146.76 machine to cease operating.  When he attempted to reinstall the previous version of the software, the system would still not respond. So Paul is currently working with BridgeCom to get to the bottom of the problem so that we can put the BridgeCom hardware back in service at Robison Park.

In the interim, Jim Pliett is attempting to utilize our Motorola based “emergency” repeater on 146.16/.76 from his QTH near Columbia City using a yagi, at 70 feet, aimed towards Ft. Wayne.  Depending upon how well this works, we may wind up installing the Motorola system at Robison Park until we can get the problem with the BridgeCom system resolved.