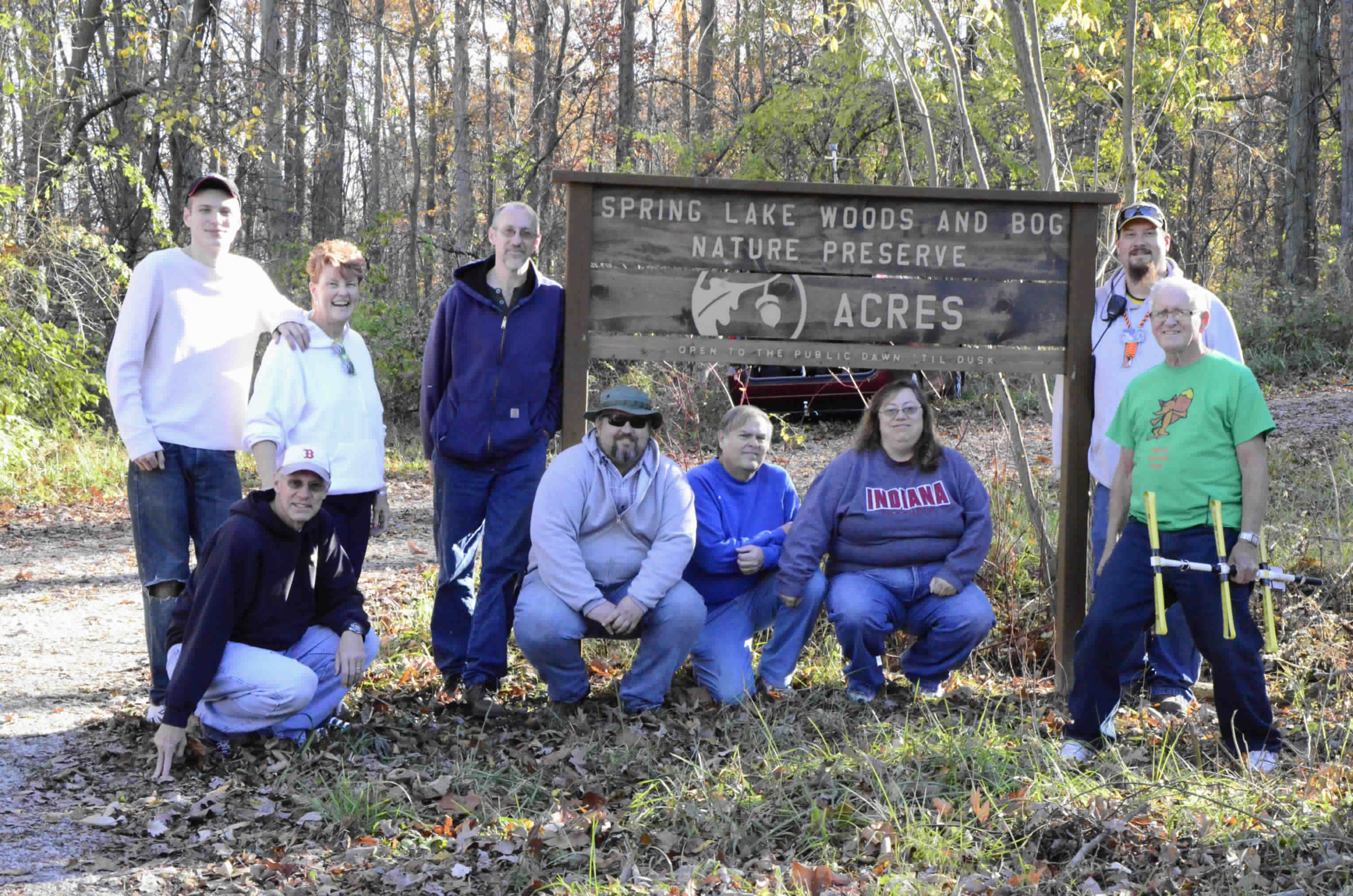 This month’s foxhunt, the final contest of 2015, occurred on 1 November amidst absolutely gorgeous weather that was clear, dry, and with a temperature around seventy degrees, truly unusual for this time of the year in these parts. But who’s complaining? Three teams of hunters showed up at the Cobin Memorial Park starting point. They consisted of the team of Jim Pliett, K9OMA and Al Burke, WB9SSE, the team of Steve and Linda Nardin, W9’s SAN & LAN and their grandson Alex, and the team of Jim & Kim Machamer, KB9’s DOS & DOT.

Fox duties were provided by Fred Gengnagle, KC9EZP, Charles Ward, KC9MUT and Robert Dean, KC9UHU. They had found a brand new Acres Preserve location to serve as the fox hide spot, the Spring Lake Woods and Bog Nature Preserve, located at Lake Everett, about six miles due east of Columbia City. They set up a yagi driven at about 50 watts to serve as the high power fox. The low power fox, the micro-fox, consisted of a microprocessor implemented low power transmitter (around 20 mw) driving a stub antenna. The low power fox package was stuffed inside a hollowed-out tree branch lying on the ground amidst a bunch of other brush and detritus. It was very well camouflaged. Both the high power fox and microfox emitted on 146.855 MHz.

Promptly at 13:30 all of the hunters heard the high power fox come up on frequency with a bearing towards the north-west, and so off we went. Jim & I headed out on State St. eventually wandering over to Leesburg Rd. and hence to Lake Everett. Following DF readings we started hearing the microfox when we got close to Lake Everett. So we sorta circled around Lake Everett until we came upon the Spring Lake Woods and Bog Nature Preserve which had just recently been opened to the public by Acres. There we found the other two foxhunter teams and the fox crew itself.

As it turns out Steve and Linda’s grandson Alex had been the first to locate the microfox followed by the Machamers, and finally by Jim and I. I had to get right on top of the tree branch that the microfox was hidden in to hear the fox’s third harmonic well, probably due to the use of the stubby antenna. But the third harmonic equipment really let me hone in on the little bugger.

After taking a group picture at the hide site everyone wandered over to Jim and Annie Pliett’s QTH for the end-of-season bon-fire feast. Annie and Carole had stayed behind to prepare hot dogs, red and white chili, and other goodies augmented with side dishes brought in by the participants. And of course, what would the event be without Jim’s bon-fire lighting ceremony. A very nice blaze ensued (without kittens) and all had a good time. We even roasted a few marsh-mellows (but no kittens).

Given that Alex was the first to find the microfox, the Nardins are in line to serve as the fox for the first hunt in 2016 which is scheduled to occur in February. The scores for the November hunt and totals for the year are as tabulated below.

So, that’s it for this year. It was a lot of fun. Charles, KC9MUT was overall high point scorer and will have his name and call engraved on our traveling foxhunt plaque for 2015. We hope some of you will join in on the fun when we resume in February.