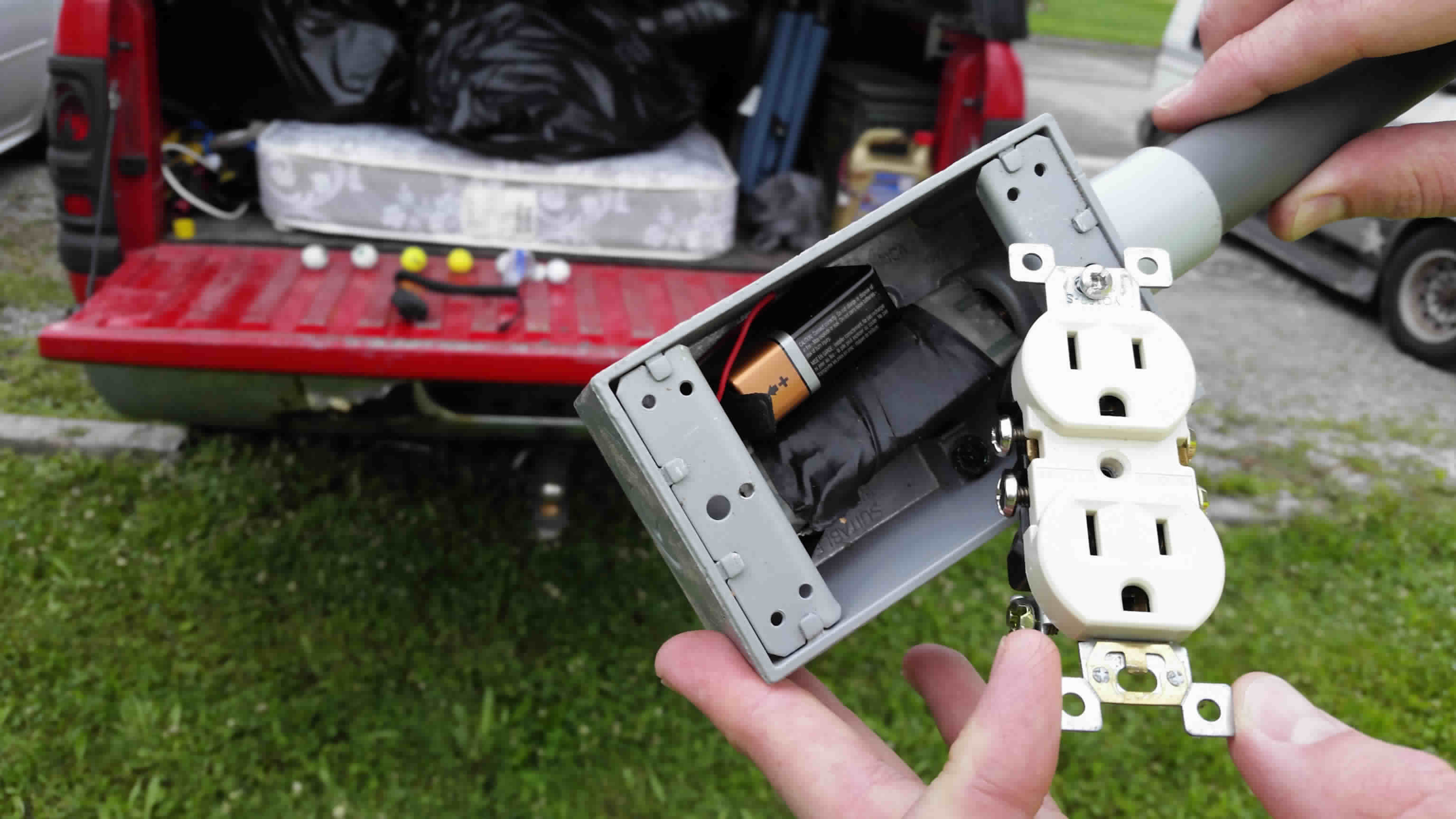 The July foxhunt occurred as scheduled on 12 July, in a brief respite between monsoons. There were only two foxhunting teams available for this contest what with people decompressing after participation in the Three Rivers Festival parade the day before, replacing the brakes on their van, putting the finishing touches on their Ark, brewing up 55 gallon drums of DEET, and so forth. The two teams available to participate were that of Kim & Jim Machamer, KB9’s DOT & DOS, and the team of Carole & Al Burke, WB9’s RUS & SSE.

The role of the fox was provided by Charles Ward, KC9MUT, Fred Gengnagle, KC9EZP and Robert Dean, KC9UHU, commonly referred to within the foxhunting community as “The Devious Ones”, (for good reason). They hid out at a City of New Haven Park Department facility several blocks from Charles’s QTH near an out-of-service Parks Department swimming pool. They chose this spot in somewhat of a panic after having to abandon two other previously planned hide locations because those sites were under water. They employed the usual high-power fox plus a microprocessor enabled micro-fox which burped out about 200 mw of cw on 146.580 MHz.

Now, the Ward-Gengnagle-Dean crew outdid themselves in camouflaging that microfox. They put it inside an aluminum duplex service box, you know, the kind you routinely find in outside locations that are meant for waterproof service. The thing had a standard duplex recepticale installed so you couldn’t see the microfox inside. The microfox’s antenna extended down into about a 6″ length of standard plastic conduit with a stake on its lower end that was shoved into the ground. They installed it alongside several other electrical outlets grouped around a fence post so that the thing looked like it had been there for years. Absolutely devious!!

As it turns out, Jim & Annie Pliett were occupied at their lake place in Michigan, and could not participate in the hunt. But I had their foxhunting van because we used it to support the FWRC’s participation in the Three Rivers Festival parade the day before. So it was just Carole & I driving the van and operating the cubical-quad foxhunting antenna mounted on the roof of Jim’s van. We got to the Cobin Memorial Park start location a few minutes late so the hunt started at 13:40 hours instead of the usual 13:30.

Both teams heard the high power fox transmissions right off the bat, and we got DF bearings to the east, indicating that we would be heading into that dreaded RF sinkhole, New Haven. So we headed out Lake Ave. and then the North River Rd. and thence into New Haven proper. We had been getting consistent bearings on the high power fox, and then on the low power fox once we got into New Haven. At that point we evidently drove under a low hanging branch because the DF bearings, to put it in technical terms, went kablooey. The antenna pattern had no directivity. After observing a few frustrating fox transmissions we stopped and I took a look at the antenna and discovered that both the 1st director and the reflector were boogered-up (another technical term). I should have attempted a field repair, but I didn’t, even though I figured I would incur the wrath of Jim for messing up his antenna. (He was cool about it though, I only have to mow his lawn for two summers).

We had to try to find the fox based upon signal strength alone, which proved difficult. Since we were near Charles’s QTH, we figured “Aha, that dirty rass-a-frass is sitting on his front porch with a cold one taunting us from there”. But no, that wasn’t the case. After driving around his neighborhood a bit we finally spotted his vehicle and the Machamer’s at a New Haven Parks facility a few blocks to the east of Charles’s QTH.

Kim & Jim had already located the microfox by the time we arrived. Curiously, Carole and I noticed that everyone had a knowing grin on their faces when we went afoot. I was using my third harmonic yagi and quickly was able to identify the location of the microfox, obviously near a fence post where a number of electrical outlets were located.
As I described previously, the microfox was located inside an aluminum duplex box that looked like it had been there for a long time.

Both Carole and I touched the box several times not realizing the evil Ward-Gengnagle-Dean crew had hidden the microfox within.

But I finally pulled on the box, and it and the associated conduit came out of the ground. The conduit was attached to a stake. Kim noted the look on my face when I realized how devious this fox hide had been, and commented to Charles, “I’d be worried where Al’s going to stick that stake”.

Following the hunt, everyone wandered over to the Rack & Helen’s Bar & Grill in downtown New Haven and chowed-down. They offer good food in that place and the servings are huge. THEN we all went a few blocks south to the Carousel Ice Cream shop and had a delicious and well deserved dessert. (Fox hunters eat well).

Kim & Jim Machamer won this one, so they will serve as the fox for the August hunt which will occur on Sunday the 2nd. The fox will be warbling on 146.430 MHz, and we will use 146.760 for the intercom. (I don’t know who found the microfox first, Jim or Kim. Nobody will tell me. So I’m going to be a gentleman and assume Kim found it first, until someone updates me. The scorecard below will reflect that assumption).

Given who found what when mentioned above, and the associated assumption, the points accrued for this hunt, and for the year-to-date points are: