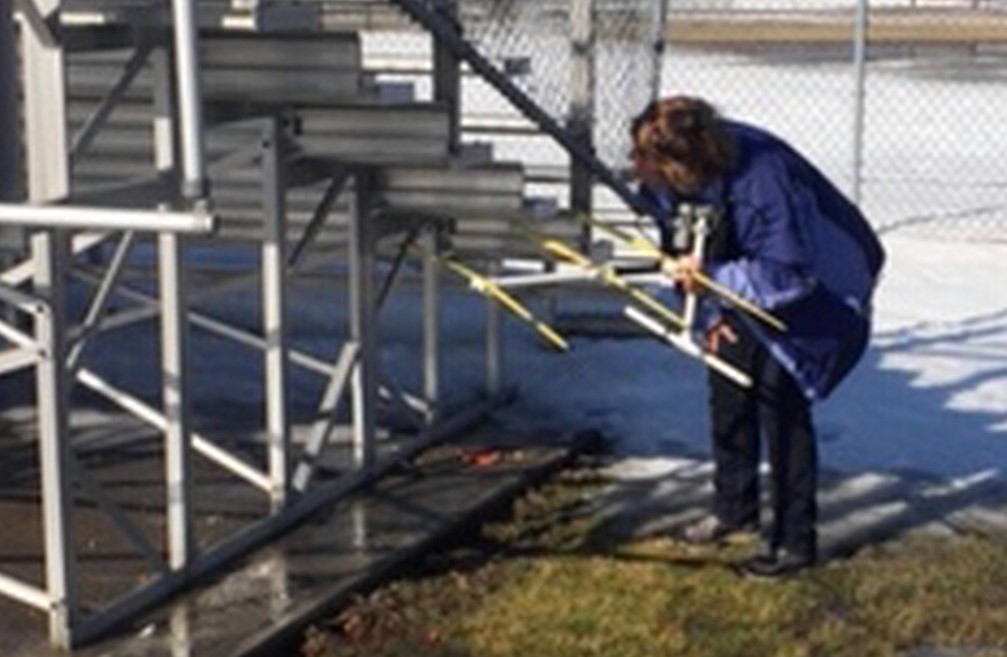 The last week of January was a real struggle! Temperatures hit near record lows, pipes burst, water mains broke, and the Interstates were littered with semis that had their diesel fuel gel up. Schools missed up to four days. All this bad weather had us all wondering if having our first Fox Hunt of the year on February 3rd was going to be a bad idea! As it turns out, the weather was just great! Temps heading up into the low 50’s, and the sun was shining with a gentle breeze blowing.

The ‘Fox’ team of Linda and Steve, W9LAN & W9SAN, had chosen to hide out on the eastern side of Allen County at Woodlan K-12 school, just to the west of Woodburn.

At 1:30pm the foxes started transmitting. During the first transmission the fox was accidently set to low power. So although the fox signal was weak at the Cobin Memorial Park start point, the assembled hunters (the team of KC9MUT & KC9EZP, the team of K9OMA, KA9YYI, WB9SSE and ride along hunter Brian Mockenhaupt, and the team of K9LI and his wife Julie plus ride along hunter KD9ITZ) heard it and started heading to the east. Progress was halted for some (more than a half hour for the K9OMA team) by a Norfolk and Southern freight train that came to a halt across several of the grade crossings on roads heading east. (Accusations that the fox team had conspired with N&S engineer Phil Hooper, AB9IZ, to use his company’s trains to impede the hunters was later proved to be fake news!)

The day was nice while we were awaiting hunters as we transmitted from our spot at the school parking lot. A sheriff deputy pulled into the parking lot, and for a while we felt that we might get a visit and a few hundred questions about what we were doing there with a very strange looking antenna on our van, but to our surprise nothing happened! (It is generally felt that there would definitely have been questions asked by the cops if the fox’s had been the Pliett/Burke crew, and had it been the Ward/Gengnagel team, the cops would have come out of their vehicle with guns drawn and bazookas at the ready).

After nearly 40 minutes of transmitting on the fox frequency, the first hunter arrived on the scene, and it was Don and wife with new huntress Carla. I offered Carla a tape measure yagi with offset attenuator, and she quickly got the hang of it and started walking in the direction of the athletic fields and the signal from the micro-fox.

Within minutes, the team of Charles, KC9MUT, and Fred, KC9EZP, wheeled into the parking lot. Seems they had better luck with getting around that N&S train than the K9OMA team. Both Charles and Fred quickly deployed hunting gear and they too went off in search of the hidden transmitter. It wasn’t too long before Fred gave me the “I found it!” gesture. A few minutes later, new hunter Carla also located the fox in the foot panels in the aluminum bleachers at one of the ball diamonds. She was quickly followed by Don, K9LI, and Charles, KC9MUT.

We were just about to dispatch a Search and Rescue team complete with St. Bernards with little whiskey barrels under their necks to find the remaining team. When we did finally contact them on the ’76 intercom frequency, they exclaimed they were lost now in Woodburn! We told them to head west to the school area and sure enough, they wheeled in there after a few minutes. Al, WB9SSE, was next to find the fox, followed by caboose Jim, K9OMA. (Apologies for the railroad reference!)

After all the hunters had successfully found the naughty little fox, it was decided to go to the Bob Evans at Chapel Ridge for tall tales and yummy food.

The scores resulting from this months hunt were as follows:

Next month’s fox hunt will be Sunday, March 3rd. Charles, KC9MUT and Fred, KC9EZP will serve as the fox. Why not come out and join us? For those that do, a free tape measure yagi will be given for those who participate in the hunt! It is a great way to get started in this fun part of Amateur Radio.