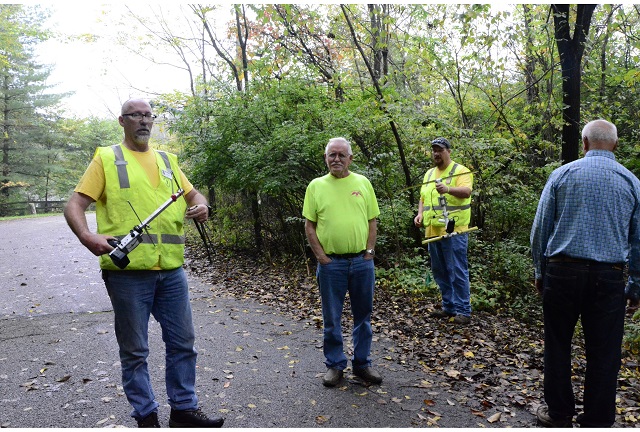 The October foxhunt occurred on a cool, foggy, rain threatening fall day, that being 7 October 2018. We were back up to the usual foxhunt team strength of three. Team one consisted of Charles Ward, KC9MUT and Fred Gengnagel, KC9EZP. Team two included Steve and Linda Nardin, W9’s SAN & LAN. Team three was composed of Don Glick, K9LI, his wife Julie and her father Ed.

Jim Pliett, K9OMA, Carole Burke, WB9RUS and Al Burke, WB9SSE served as the fox for this outing.  They had previously scouted out a publicly accessible hide location in the Cedar Creek area north of the city that they had concluded was a suitably evil spot, and had gone to some lengths fabricating a fairly clever camouflage scheme to hide the microfox. Much to their horror, when they arrived at the site around 13:00, they found that access to the site had been barred by virtue of a padlock.  Panic ensued. They started driving around aimlessly looking for a spot to stop, got thoroughly lost, and finally wound up at the corner of Lanyard Lane and Cable Trail, just north of East Cedar Canyons Rd. and east of Coldwater.

Jim taped the microfox to a small, loose tree branch he found and attempted to push the tree branch up into a tree to make it a little more challenging to spot. Much to our horror, again, the microfox came loose from the branch and fell to the ground amongst a lot of ground cover. Panic ensued, for the second time, as we had a hard time finding the microfox amongst all that ground clutter. And time was running out. (We thought it ironic that we had not brought OUR hand-held foxhunting gear along to help us locate the errant microfox). But we were eventually successful and stuffed that puppy up into the tree, just in time to start the hunt at 13:30.

The high power fox was heard right off the bat at the Corbin Memorial Park starting point where the three foxhunt teams were located at the start of the hunt. They moved out and headed north.  The Nardin’s were using a new roof mounted quad that had a few bugs in it according to Steve so some of his DF bearings were erratic. Charles told me that as he got close to the Cedar Creek area his readings indicated that the fox was in a residential area he was familiar with since he had relatives that used to live out that way. He reasoned that the area being private property, we couldn’t be located there since we’re not supposed to use private property for hid locations. So he initially discounted those readings and he and Fred went off on some wild goose chases.

Anyway, after about forty five minutes into the hunt Don Glick came walking around the corner of Lancer Lane and Cable Trail, portable yagi in hand. He had localized the fox.  After about ten minutes crawling through the forest he located the microfox.  Roughly one half hour later Charles and Fred arrived, and they located the microfox after another ten minutes of exploring the forest.  Finally, Steve and Linda showed up and Steve found the microfox in about twenty minutes of thrashing through the trees and undergrowth.

Following the hunt everyone transitioned over to Steak-N-Shake on Coldwater to partake in a well deserved meal.  The food was good, but the service was a little disappointing.

Since Don Glick and crew were the first to find the fox, they will serve as the fox for the November hunt which will be the last hunt of this year. It will occur starting at 13:30 on 4 November from the Corbin Park starting point. Please join us. You are sure to have fun, and to learn something, and we will relish the competition.

The scores for this month’s hunt and for the year-to-date are as follows: