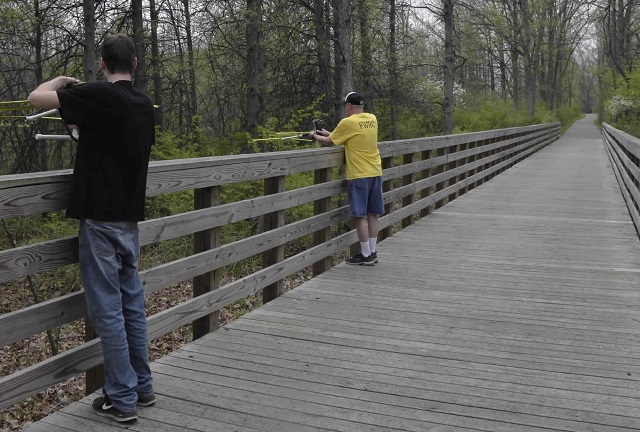 The fourth fox (hidden transmitter) hunt of 2018 occurred on 6 May, 2018, a slightly overcast but otherwise simply gorgeous spring afternoon. Two teams arrived at the starting point at Cobin Memorial Park in anticipation of the hunt beginning at 13:30 hours. The first team consisted of Charles Ward, KC9MUT and Fred Gengnagel, KC9EZP. The second team included Steve and Linda Nardin W9’s SAN & LAN and their grandson Alex (who celebrated his 20th birthday the day before).

The fox function was provided by Carole & Al Burke, WB9’s RUS & SSE. (Their usual partners, Sir Jim & Lady Ann Pliett could not attend as they were on a cruise experiencing the British Isles. Jim said if they had time they were going to stop by and check out the new Prince Louie).

Al & Carole decided to locate the fox on the Puffer-Belly jogging trail about half-way between DuPont Rd. and Carroll Rd. in La Cabreah. So they set up the high power fox in a little clearing just off the trail. They planted a five element yagi on a mast at about ten feet, pointed south, and drove it with a 20 watt mobile rig.

The microfox was stuffed inside a tree branch and placed on the ground next to a tree, about 20’ off the trail and adjacent to a wooden bridge that crossed a creek bed.

There were a lot of joggers, bicyclers, skateboarders and walkers out doing their thing on the Puffer-Belly trail that afternoon and Carole and I had an opportunity to talk to a lot of them. They were most curious about what we were up to, so they all got a bit of an education regarding Ham radio, and in particular Foxhunting.

Steve Nardin and his grandson Alex were the first to localize us at around 14:15. They hoofed in from the Carroll Rd. direction. Much to my surprise they zeroed right in on the microfox. Alex just seemed to walk right up to it, pointed down, and said “There it is!”

About fifteen minutes later Charles and Fred showed up, walking in from DuPont Rd. direction. In fairly short order they found the microfox too.

So with that we packed things up and proceeded to Culvers on DuPont Rd. for a well deserved repast.

Scoring for this hunt and year-to-date are as follows: