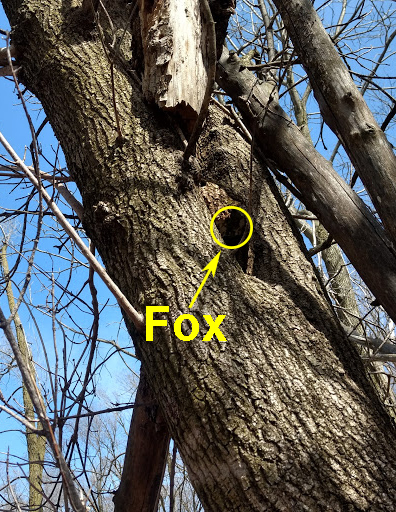 The fox function was provided by Charles Ward, KC9MUT, Fred Gengnagel, KC9EP, Bob Dean, KC9UHU, and Kevin Loughin, KB9RLW. They chose a little patch of woods just south of Pro Bowl West (on Goshen Rd.) and north of Glen Park, to hide the microfox. It was squirreled into the cleft of a tree branch about six feet off the ground wrapped in camo and almost impossible to see, even when you were a foot or so away from it.Prior to the foxhunt, Jim, K9OMA had been trying to diagnose the cause of 30 degree error in indicated direction of signal arrival exhibited by the horizontally polarized cubical quad foxhunting antenna mounted on the roof of his van. When he changed to vertical polarization, the bearing error was eliminated so he decided to try vertical polarization for this hunt. That proved to be problematic as it turned out.

The fox started squawking on 146.430 MHz promptly at 13:30 as per the grand plan. Both teams heard it at the starting point but we noticed that our DF antenna could not resolve a single unambiguous direction of arrival. During the first fox transmission we noted three apparent directions of arrival. (We think this was due to having configured the antenna for vertical polarization).

This being the case we did what any foxhunter would do. We started following the Nardin team as it appeared they were getting good (unambiguous) bearings. We eventually headed west on Lake towards downtown and lost contact with the Nardin’s. As we drove through downtown the DF bearings really started getting screwy, but once clear of downtown the bearings then began leading us north on Wells and then west on State, and finally brought us to the southern edge of Gren Park. At this point we had been hearing the microfox itself so we figured we had localized it. So we dismounted from the van and tromped (that’s an official foxhunting term) into Glen Park quickly discovering that the microfox had to be somewhere in the copse of trees between the park and Pro Bowl West. We spent a lot of time amongst the trees before Jim’s sharp eyes finally spotted the microfox itself.

Shortly following our discovery the Nardin team showed up and proceeded to search for the microfox. Ultimately Alex found the microfox.

After completing the hunt we decided to zing over to the Five Guys Restaurant in Northcrest Shopping Center for our after-hunt repast. Nobody left that place hungry.

Given the order of finish, the Pliett-Burke team will serve as the quarry for the May foxhunt. Here’s hoping a few more foxhunting teams show up for the upcoming contest. That means YOU. It’s a lot of fun.

The scores from this month’s contest and for the year-to-date are as follows: