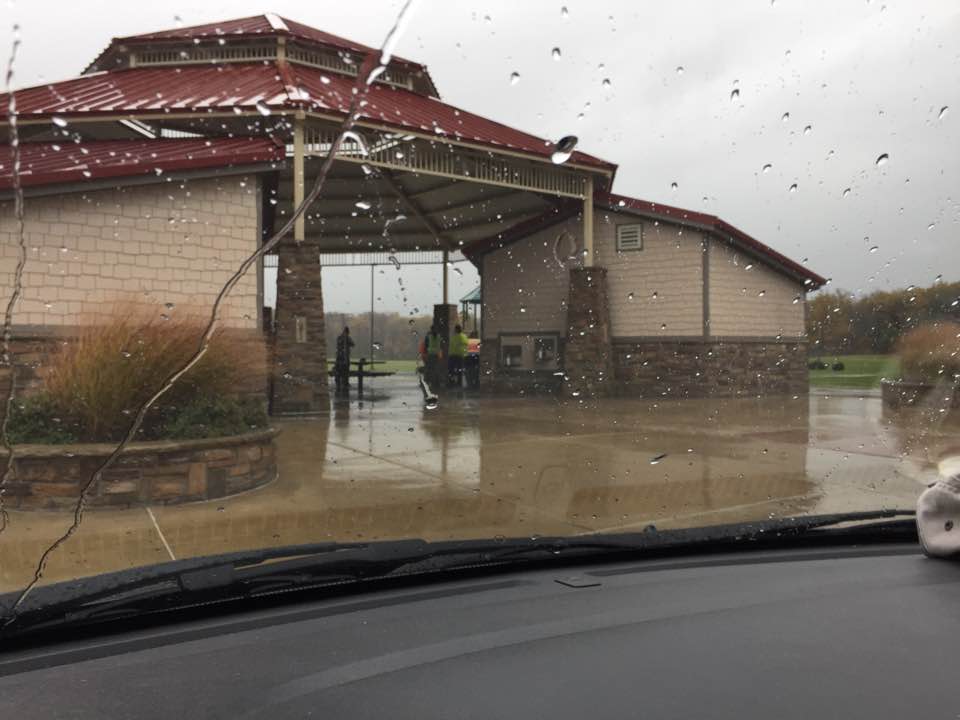 The November foxhunt, the last one of the year, was held on 5 November, 2017. Three foxhunting teams awaited the start of the contest at Cobin Memorial Park. They consisted of the team of Charles Ward, KC9MUT, Fred Gengnagle, KC9EZP and Tim Hearld, KE8ECF, a visitor from Galesburg Michigan, the team of Steve and Linda Nardin, WA9’s SAN and LAN, and the team of Jim and Annie Pliett, K9OMA and KA9YYI plus Carole and Al Burke, WB9’s RUS and SSE. Jim was trying out a new piece of software he had acquired that depicted our GPS derived current location on a Google Maps type display and allowed him to draw vectors from our current location on the true DF bearings we were getting off the roof mounted quad antenna. The idea was that after a few bearings were taken the crossing point of the bearings would indicate the general location of the fox, i.e., it was quasi automated triangulation.

Their prey was provided by Don Glick, K9LI who was ensconced a little over seven miles from the starting point at Buckner Park off Bass Rd. The weather was very freaky around the start time of the hunt with torrential downpours occurring off and on. (Weather Underground was forecasting ¾ of an inch, just between 1:00 and 2:00 pm, and further significant downpour through the rest of the day)! With all of the rain predicted Don decided to hide the microfox in the trunk of his car rather than put it out in the park thus likely preventing (somewhat) the drenching if not downright drowning of the hunters.

As it was, Don parked his high power equipment under an open-sided pavilion which provided some protection until the rain was driven horizontally by the high winds accompanying the storm. Needless to say he got WET and cheered his pursuers on. His high power fox consisted of a 25 watt radio driving a soggy four element beam situated about seven feet of the ground.

The fox started bleating promptly at 1:30 pm and was heard by the three teams at Cobin Memorial. For our part we headed off west on Lake Ave. and wound our way through downtown based upon our DF readings finally winding up around Jefferson Pointe. At that point we deduced that the fox must be located at Buckner Park and attempted to approach it during by driving west on Bass Rd. only to be stopped by road construction and the Rains of Ranchipur. “No problem” we said, “Well just loop around on the west side of the park by using Illinois Rd. to South Hadley Rd to Bass Rd., and then drive east to the park”. That worked until we were stopped dead by a train that was blocking Bass Rd. and moving very slowly.

By that time both of the other teams had localized the fox and found the microfox, and they were WET. Then we observed a herd of panicked frogs wearing May Wests and aqualungs racing for their lives towards the high ground. So what with the train blocking our path to the park, and the frog thing and all, we threw in the towel and gave up the hunt.

As it turned out the Ward-Gengnagle-Hearld team and the Nardin team both localized the fox about thirty minutes into the hunt. Charles was the first to find the microfox. So the scoring matrix numbers for this last hunt of the year, along with the accumulated scores for the year are as follows:

Congratulations to Charles for being the winner this year and thanks to all who participated. We will resume the competition starting with the February hunt in 2018.