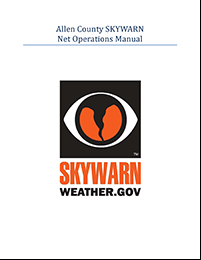 The amateur radio SKYWARN net based in Fort Wayne will undergo slight changes, effective Feb 1, 2017. Formerly known as the IMO SKYWARN Quadrant Two Net, it will now be referred to as the Allen County SKYWARN Net. The net will continue, however, to accept and relay reports from spotters outside Allen County, including stations in places like DeKalb and Defiance County, which were not officially part of the former quadrant net’s responsibility.

The de facto demise of the IMO SKYWARN organization led to the change. IMO SKYWARN’s fade from existence was symbolized by the recent disappearance of the organization’s website and further indicated by its board’s lack of activity for the past few years (a conference call in 2012 was the board’s most recent meeting).

IMO SKYWARN originally formed to implement an organized system to get reports from trained SKYWARN storm spotters to the Northern Indiana National Weather Service office via amateur radio. That system continues to exist. An amateur radio station at the NWS office (WX9IWX) can still simultaneously monitor four repeaters, including one in Fort Wayne, although recent difficulty staffing WX9IWX with volunteer hams has hampered the system. IMO SKYWARN also organized biennial advanced spotter training seminars in the past, but has not produced such an event since 2011.

Amateur radio continues to be an important resource to the NWS SKYWARN program as evidenced by a memorandum of understanding between the ARRL and the NWS. Spotter reports to many local ham radio nets, however, no longer travel all the way to the NWS via amateur radio. Instead, many local nets send their reports to the NWS via a private NWS internet chatroom known as NWSChat. In fact, our local net has used that method during several activations when WX9IWX was not on the air, including the August 24, 2016 tornado outbreak. Despite the popularity of NWSChat, the leadership of the Allen County SKYWARN Net intend for the net to remain a viable alternative in the event of internet failure, assuming WX9IWX can be staffed at such times.

The net continues to seek additional NCS’s. Contact Farlow at the email address below for more information.

Other than the net name, the only change operators might notice is that the net repeater might enter “standby mode” less often. As a quadrant net, it entered standby mode for any severe thunderstorm watch or tornado watch that affected any of the 11 counties in its quadrant, if an NCS was available. NCS’s will continue to have discretion about when to enter standby mode, but revised net procedures will no longer require standby mode for watches that do not include Allen County. To repeat, however, the net will continue to accept reports from any station that can reach the net repeater, regardless of location. And spotter traffic from a nearby county may continue to prompt a directed net, even if severe weather isn’t threatening Allen County.

Anyone who’d like to see details of how the net will now operate may download an updated net operations manual from the FWRC website. Persons with questions about the net are encouraged to direct them to Farlow, w9lw@arrl.net.