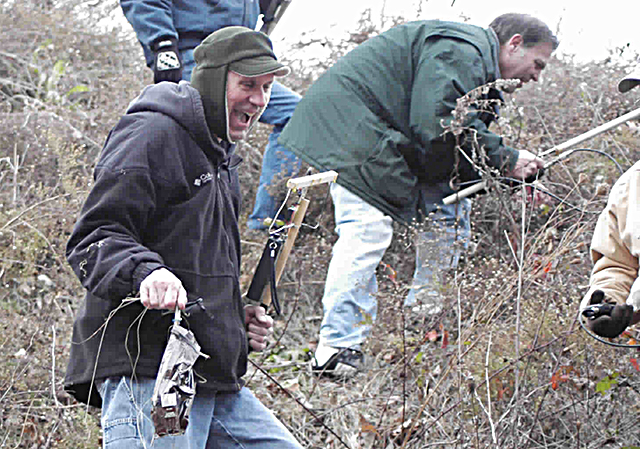 It’s time for YOU to start planning for the upcoming foxhunting season. Foxhunts will occur on Sundays in the months February through November. We knock off for December and January. The dates established for 2017 are as follows:

A foxhunt in any particular month can be rescheduled once within that month (due to weather, civil riots, Godzilla attacks or other unforeseen events). If the rescheduled hunt subsequently cannot be executed for whatever reason, then there will be no hunt that month.

The fox can be located anywhere in Allen County.

The starting point for the hunters is the River Greenway Trailhead (Cobin Memorial Park) near the Lakeside Golf Course.

Hunt duration is limited to 2 1/2 hours unless all participants agree to extend it during a particular hunt.

The “fox” normally consists of a high power fox and a micro-fox. The high power fox transmits an FM signal strong enough to be heard and DF’d  from the Cobin Memorial Park starting point. The micro-fox is a low power microprocessor controlled cw transmitter, typically on the order of tens of milliwatts that is the actual quarry of the hunters once it is localized by virtue of the high power fox. It is at the fox’s discretion if they employ a microfox in the hunt or not. They may choose to just run with a high power fox only, although that makes the hunt less fun in my opinion.

The high power fox transmits for one minute every five minutes starting at the nominal 13:30 hunt start time.

Scoring rules are as follows:

When a foxhunter physically locates and eye-balls the fox, (normally the micro-fox), he/she will notify the fox who will note the time.

For example, based upon the results of the February 2015 foxhunt the scoring plan resulted in the following numbers:

We generally meet at a restaurant or ice cream shop following the hunt to partake in a light meal, and trade comments and lies about the hunt. (Now, if anyone wants to bring a pre-hunt snack to the Cobin Memorial Park starting point for all of their fellow hunters to participate in, it is highly recommended that they bring meat balls thus keeping with a tried and true ham radio tradition dating back to the early 1920’s).

So please, mark your calendar for the first hunt on the 5th of February and join in on the fun.