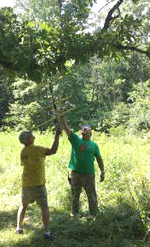 July 10 arrived as a sunny Indiana summer day with birds singing, the sun shining and foxhunters twirling their yagis and quads. Three teams showed up at the starting point at Cobin Memorial Park near Lakeside Golf Course. The hunter teams were: Jason and Debbie, KB9UOQ & KK4QXC; Jim and Annie, K9OMA & KA9YYI plus Carole & Al, WB9’s RUS & SSE; and new fox hunters (and also newly minted hams) Jim & Brenda, KD9’s GDY & GDX who, despite participating in the June hunt as tag-alongs and thus rubbing elbows with the foxhunting motley crew, decided none-the-less to join our merry band.

Usual foxhunters Steve and Linda Nardin, W9’s SAN & LAN were not able to participate as they were somewhere up in the Upper Peninsula participating in a Mini-Cooper rally while foxhunters Jim & Kim Machamer, KB9’s DOS & DOT had to sit this one out as their foxhunting van was down (with a sick transmission, I believe).

Charles, KC9MUT, Fred, KC9EZP and Robert, KC9UHU served as the fox for this hunt. They found a place called the Blue Cast Springs Nature Preserve way out on old US 24 at Blue Cast Rd., north of Woodburn near the Indiana-Ohio border.

The Blue Cast Springs area was once the site of the Blue Cast Mineral Springs & Sanitarium, around the turn of the last century, where patrons could “find relief from the ills of rheumatism and stomach and kidney problems by sipping the waters from the natural mineral spring, and taking part in magnetic mud-baths.” The sanitarium is no longer there, but the springs and an ACRES Land Trust nature preserve are.

The evil crew of Charles, Fred and Robert were intent on giving the intrepid foxhunters indigestion (no doubt figuring the hunters could make use of the therapeutic mineral springs if need be), by secreting the camouflaged microfox in the branch of a tree about 7’ off the deck which itself was located within a thicket on the ACRES property. They employed a mobile rig and a yagi to serve as the high power fox and began transmitting promptly at 13:30 local time. This signal was weak, but heard immediately by Jason and Debbie at the Cobin Memorial Park starting point, but not heard initially by the other two teams. So Jason and Debbie headed out east right away where- as the Pliett/Burke team and the Plummer team required an extra bit of time to detect the fox signal and get into the hunt.

The four element cubical-quad on the roof of Jim’s and Annie’s van led us more-or-less directly towards the Blue Cast Springs Land Trust area where we found Charles, Fred and Robert, plus Jason and Debbie, who had gotten there first (and located the micro-fox). After the usual stomping and thrashing around, much to the delight of Chares and crew, we found the micro-fox in its tree branch lair. Following this, Jim and Brenda arrived on scene and located the micro-fox.

As Jason and Debbie were first to find the micro-fox, they will serve as the fox for the August contest which will occur on 7 August with the fox emanating on 146.430 MHz and using 146.760 MHz as the intercom.

Scores year-to-date and for this hunt are as follows:

Why don’t you come join us on next month’s hunt? It’s a lot of fun.