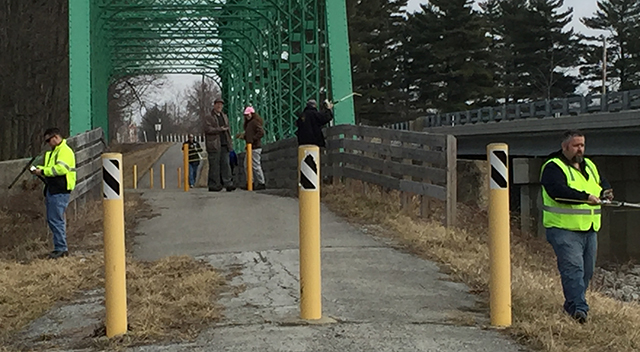 March 6th was a nice day – low winds, and decent temperatures (48F) for early March in Indiana. The sun was out, and the Foxhunt turnout was good: Five teams were vying for the elusive fox:

After participating with the Foxhunt team for over a year now, Deborah and I were trying to figure out a way to be more devious than Charles. We scouted for locations the weekend prior, and came up with a lovely place out of the way: The historic Brunswick bridge in the southeast part of the county. However, it didn’t feel devious enough. Sure the location was tricky to get to, due to some road closures that forced you to circle behind the transmitter to get there, but it wasn’t quite “Charles-devious”. For that, the praise (or scorn) can be given to Deborah, who mischievously suggested that the transmitter shouldn’t be anywhere near the bridge. In fact, it should be right next to the high power transmitter.

The hunters got to enjoy the on-air high power transmission recitals of “Green Eggs and Ham” and “The Raven”. Surprisingly no comments were made about the recitals.

A decoy was put into a concrete wall, but only Robert and Al found the decoy. The micro fox was slid into a hollow passage on the frame on Jason’s truck with 2 inches of its antenna sticking out. It wasn’t camouflaged, or buried, it was in plain sight – just so plain that it couldn’t actually be that easy to find. Being reminded of where she suggested it be hidden, Deborah is smiling about it now as I type this.

Antenna pieces, a folding chair, a bag, and some other stuff were scattered around the truck and in the bed – all put there to distract the hunters from the den. The bridge was an obvious spot, but was abandoned in less than 5 minutes by each team as they homed in on the truck.

It was certainly enjoyable watching Steve try to figure out where the fox was hidden. At one point, he even kicked the tires; I thought he was going to ask for a test drive and make an offer. I had to remind the hunters that the fox was accessible from outside the vehicle, and it was not in any part of the vehicle that was locked up. Until the first hunter found it, no one believed me.

Linda was the first to find the fox. Followed shortly by Kim, then Charles, Fred, Steve (after a few more tire kicks), and then Dave and Robert. Al and Jim were last on the scene, but didn’t take too long to find it once they arrived.

Culvers was our stop afterward, and all in all it was a good hunt, and good company. Looking forward to see if Linda can one-up the devious level for April.