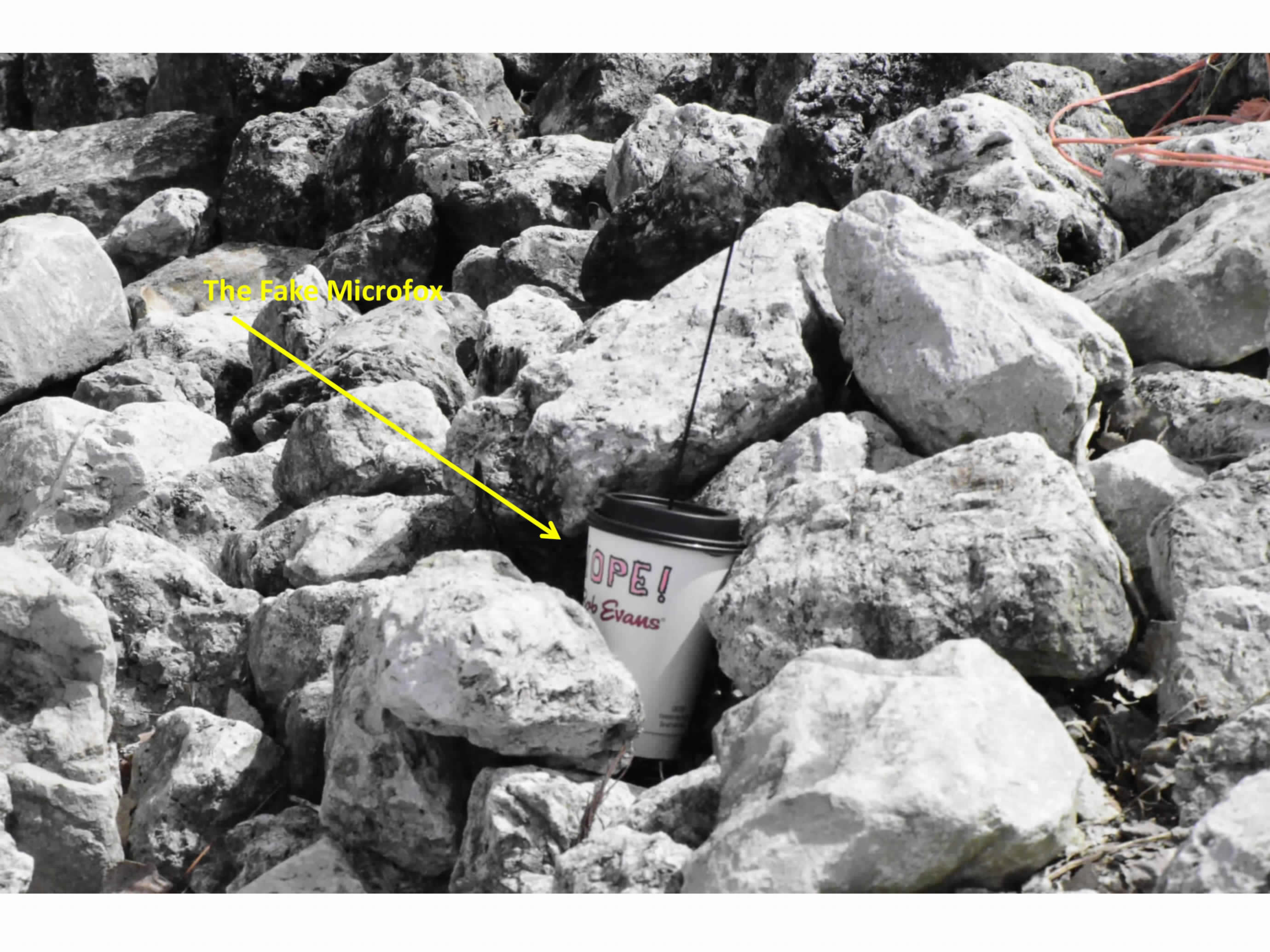 See more photos from the fox hunt in this website’s photo gallery.

The September foxhunt occurred on 13 September, a gorgeous early fall day. Turns out that three hunter teams were available for this contest. The first team consisted of Steve and Linda Nardin, W9’s SAN and LAN plus their grandson Alex. The second team included Charles Ward, KC9MUT, Fred Gengnagel, KC9EZP and Robert Dean, KC9UHU. The third team consisted of Kim and Jim Machamer, KB9’s DOS and DOT. This motley crew awaited the 146.160 MHz emissions from the fox at their starting point of Cobin Memorial Park.

Carole and Al Burke, WB9’s RUS and SSE served as the fox for this contest. The Pliett’s, Jim and Annie, couldn’t attend this one as they were up at Soaring Eagle attempting to break the bank. So it was up to the Burke’s to find a hide-out for the furry little quarry.

Now it turns out that Carole has been hanging out a bit with Kim lately and it seems that some of the Machamer’s crafty (fox hiding) ways have rubbed off on Carole because she picked out a fairly devious spot to ensconce the thing. Although Al objected, muttering that “even Charles, Fred and Robert wouldn’t be this cruel”, Carole had her way and made Al set up the high power fox on the western shore of the St. Joe river on the River Greenway adjacent to the Griswold play lot, with a clear view of the eastern shore of the river. The high power fox consisted of a jumper-battery powered mobile rig pumping about 50 watts into a 4-element yagi aimed south-southeast. (Carole made Al lug all of this stuff from the car, hidden in the Oak River Apartments parking lot, to their lair on the River Greenway…..and batteries, for one, are heavy). Then she made him stash the microfox itself across the river in the ballast rock that lines the eastern shore of the river near Northside Drive and St. Joe Blvd. Then she made him fabricate a decoy microfox in the form of a large Bob Evans coffee cup complete with a fake antenna, and with the sign “Nope” printed on the side of it, and had him stash it on the western shore of the river quite near their (high power fox) lair, in order to draw the foxhunters in. (Yes, sometimes it’s like living with Erwin Rommel).

What with all this lugging of gear, building fake microfoxes, and running around both the eastern and western shores of the St. Joe River, foxhunt transmissions didn’t start promptly at 1330 hours as they’re supposed too. And given that Al was a little preoccupied he also failed to connect the mobile rig’s transmission line up to the yagi, so all he got when the high power fox commenced transmissions was 50 watts of reflected power back down the transmission line. So naturally the hunters couldn’t hear the fox. This was corrected in short order and the fox was finally heard starting at 1355 hours, and the hunt was on.

Since the fox was located only a few miles from the Cobin Memorial Park starting point, it only took about 20 minutes for the Nardin and Machamer teams to show up at our hiding place. They immediately started running around the west bank of the river DF’ing on the microfox signal. Pretty soon Alex stumbled upon the (Bob Evans coffee cup) decoy microfox and they thought they had found the genuine article. Then they noticed the “Nope” sign, realized what was going on, said something (un-mentionable) to me, and took off for the west side of the river. After tromping up and down the west bank of the river while Carole and I watched, Alex found the real microfox amongst the river ballast thirty minutes into the hunt, and he was followed by Jim & Kim at thirty one minutes.

About that time Charles, Fred and Robert showed up on our side of the river and commenced searching for the microfox. After finding the phony microfox they too realized that the real McCoy had to be located over on the other side of the river, and off they went. With a bit more searching they too found the real microfox forty eight minutes into the hunt.

With all that hunting stuff out of the way everyone enthusiastically proceeded over to Hall’s Prime Rib on State St. and pretty much went through the menu chomping down on various delights, except for dessert. For that, everyone then went next door to the Carousel Ice Cream Shop and continued pigging-out. (It must be recognized that foxhunters really know how to eat well).

Given that Alex was the first to find the fox, the Nardin team will be the fox for the October hunt which is scheduled to occur on Sunday, the 4th of October with the fox emitting on 146.340 MHz and with intercom function provided by the 146.760 machine.

Based upon the outcome of the September hunt, scores for September and cumulative for the year are as follows:

The October hunt awaits. Why not give it a try?