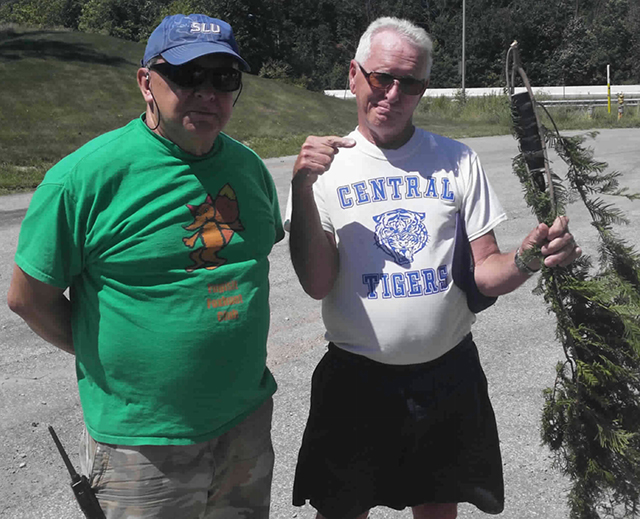 The August foxhunt occurred on 2 August on a beautiful, sunny, non-monsoony (for a change) day. Two hunter teams were available for this contest. The first team consisted of Jim & Annie Pliett, K9OMA & KA9YYI, plus Carole & Al Burke, WB9’s RUS & SSE. The second team consisted of Charles Ward, KC9MUT, Fred Gengnagel, KC9EZP and Robert Dean, KC9UHU. Both teams awaited the 146.430 MHz emissions from the fox at their starting point of Cobin Memorial Park.

The microfox itself was one of the microprocessor controlled units that emits about 20 milli-watts of cw every 2 ½ minutes. It was well camouflaged with some pine tree branches wrapped around it, and turned out to be very hard to see. More on that later.

The fox came up at the appointed time (13:30) and both hunter teams immediately heard it bleeping out to the north-northeast. So off we went. Pretty soon the two hunting teams became separated, and ours proceeded north up Maplecreast until we hit Rothman Rd. where we turned east for a bit, and then turned back north again on Young Rd, following our DF bearings. At the terminus of Young Rd. on the south side of I-469, about thirty minutes into the hunt, we found Jim & Kim ensconced in their van doing their high power fox thing. So we got our hand-held gear out and started hunting on foot. The microfox’s fundamental signal was quite strong, but I heard nothing on the third harmonic. We could look across I-469 and see where the bisected Young Rd. started again. Pretty soon it became obvious to us that those tricky Machamer’s had stashed the microfox across the Interstate. So we got back in Jim’s vehicle and backtracked to Maplecrest, crossed under I-469 and proceeded east on Flutter Rd. That’s where we saw the Ward, Gengnagel , Dean team’s vehicle also ripping east on Flutter. We said “Oh shucks” (yah, really), “they beat us again”. But they didn’t turn south down Young Rd. but kept going east. Since we knew the microfox just about had to be on the north section of Young Rd., and close to I-469, we turned down Young Rd. and stopped where it ran into I-469. Once we got back on foot I started hearing the third harmonic which pointed directly at the fence that defines the right-of-way of the interstate. The third harmonic led me directly to the microfox. I knew it had to be there in the weeds up against the fence, but I couldn’t see it because of the camoflauge job Jim & Kim did on the thing. But at forty-one minutes into the hunt, after a little thrashing around in the undergrowth I finally found the thing. (Thank goodness we do not hunt in rattle-snake or Gila-Monster territory).

Now, not to be out-done by Jim & Kim’s craftiness, and since we realized that Charles and crew were not yet sure on which side of I-469 the microfox was located, we drove back to Jim & Kim’s location and got on foot again “hunting” for the fox. Sure enough, Charles and crew showed up and proceeded hunting on foot too. But after a bit they too realized that the microfox was across the interstate and proceeded back across it, down Young Rd., and eventually found the microfox about sixty-two minutes into the hunt.

Following the contest everyone buzzed over to the Dairy Queen on Maplecreast and Rothman Rd. and partook of their offerings. It was gooood.

Given the Pliett-Burke team won this one, they will serve as the fox for the September hunt which is scheduled to occur on Sunday, 13 September. The fox will radiate on 146.160 MHz with the intercom on 146.910 MHz.