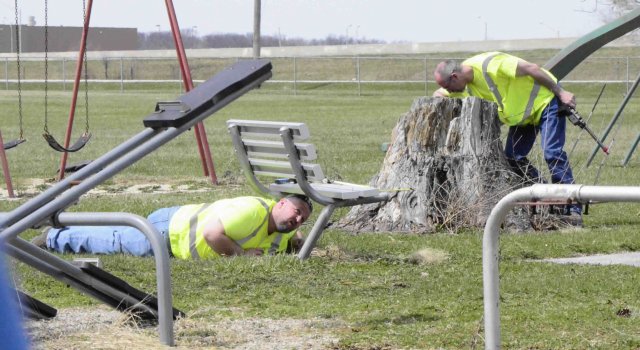 Well now, given that the weather in February and March sucked in general, and specifically as regards foxhunts, April the 12th rewarded us with a simply beautiful day to pursue the wily canine in the wilds of northeast Indiana for the April contest. The hunters included the team of Linda & Steve Nardin, K9’s LAN & SAN, the team of Charles Ward, KC9MUT & Robert Dean, KC9UHU, and the team of Jason Eicholtz, KC9UOQ & his daughter Kiley, plus Clay Rust, KC9WUJ. Unfortunately veteran hunters Jim & Kim Machamer, KB9’s DOT & DOS were unable to participate in this one.

The role of the fox was provided by Jim & Annie Pliett, K9OMA & KA9YYI plus Carole & Al Burke, WB9’s RUS & SSE. Their lair was the playgrounds of the Roanoke Baptist Church situated at the corner of Feighner Rd. & Lafayette Center Rd. near the GM truck plant in south west Allen County. We of course had obtained permission from the Roanoke Church’s pastor to use the playground as the fox lair after explaining to him what it was all about. Turns out he had had an uncle who was a ham, so he was eager to graciously grant our request.

The high power part of the fox utilized a cubicle-quad antenna on the roof of K9OMA’s van pumped with about 40 watts from Jim’s mobile rig. The low power fox consisted of a microprocessor implemented micro-fox providing about 50 milliwatts into a simple monopole and blurping out (that’s a technical term) cw identification for one minute every five. Both high and low power systems emitted on 146.160 MHz, the 146.76 repeater’s input frequency. The microfox was really well hidden on the bottom side of an innocuous park bench innocently co-located with other playground equipment.

Now the Roanoke Baptist Church is located south just of I-469 so that the elevation caused by the highway was between us and Ft. Wayne. That elevation had a pronounced shielding effect on all of the Ft. Wayne based repeaters, and propagation to the north-east in general. Hence we had to initially relocate the high power fox from the church parking lot to a location on Feighner Rd. north of I-469 in order for the high power fox to be heard at the foxhunter’s starting point at Cobin Memorial Park. That, and the slightly late arrival of one of the foxhunter teams resulted in the foxhunt starting at 13:45 rather than the planned 13:30 start time. But once the fox commenced transmitting, it’s initial warbling was heard by all hunters, and so they commenced charging south through the middle of town. At the outset we of course made sure all of the hunters knew that we were located “somewhere in Allen County”, and on private property.

After about forty minutes we figured that all of the hunters would have travelled close enough to the fox location that the attenuation caused by the I-469 elevation would have been overcome, so we moved the high power fox back to the church parking lot.

Promptly fifty minutes into the hunt KC9MUT & KC9UHU pulled into the parking lot and starting hunting on foot. They were followed by the KC9UOQ/ KC9WUJ team at seventy seven minutes and W9’s SAN & LAN at eighty minutes.

Near the bench there was a tall circular playground slide, and also a sizable tree stump, both of which we knew would appear as likely microfox hiding spots to the intrepid hunters, and let me tell you, everyone gave those two objects quite a going-over trying to find the little bugger. In the process everyone looked over (hee-hee, and under) the innocuous little park bench several times while searching.

Bob of the KC9MUT/KC9UHU was the first to actually locate the microfox under the park bench at sixty six minutes into the hunt. The KC9UOQ/KC9WUJ team found it at eighty eight minutes, and the W9SAN/LAN team at ninety five minutes.

I thought that KC9UOQ & KC9WUJ were going to dismantle the circular slide in their process of looking for the microfox in it. But it did give Jason’s daughter Kiley ample time to check out all the attractions in the playground and have a grand time trying them out.

Steve, K9SAN seemed convinced that the microfox was hidden somewhere within the tree stump, and I must admit he enthusiastically searched for it within that mass of wood. At one point he was so frustrated that he kicked the stump hard enough that I thought he might have injured his foot. Observing this, SOMEONE within our group suggested, and I bellowed out to Steve, “Hey Steve, whatsa-matter, you stumped?”
Kinda cruel, ehh. (Pliett made me do it).

Pictures taken of the high-jinks going on during this hunt are available on this website.

Given the time-to-find data, Charles, KC9MUT and Robert, KC9UHU will serve as the fox for the May hunt which will occur on Sunday, May 3rd with the fox emitting on 146.340 MHz and employing the 146.760 machine as the foxhunt intercom.

After concluding the hunt everyone proceeded over to Sara’s Restaurant for refueling. The menu over there is very large and everything (I’ve run across so far) is excellent. It was gooooood!!

Given the time-to-find numbers mentioned above, the following points earned for this hunt, and for the year-to-date are:

It seems that we typically have spare room in the foxhunter’s vehicles, so we encourage you out there who have been intrigued with the idea of joining in on a hunt to ride-along with a foxhunt team just to see what it’s like. Who knows, the bug may bite you too.