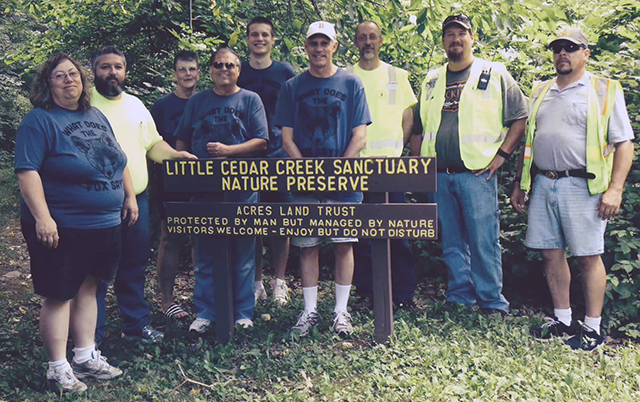 Well, halfway through this beautiful summer, on a clear and muggy 13th of July, three foxhunt teams gathered at the Ft. Wayne Safety Academy as the starting point for this month’s contest. The three teams consisted of Jim & Kim Machamer, KB9’s DOT & DOS plus their nephew Brandon, the team of Steve & Linda Nardin, W9’s SAN & LAN plus grandson Alex, and a team consisting of Charles Ward, KC9MUT, Fred Gengnagel, KC9EZP and Ben Myers, N9IRX.

Robert Dean, KC9UHU single-handedly served as this month’s fox and he was hidden out at the Little Cedar Creek Wildlife Sanctuary at the end of Sunlight Lane off East Fitch Rd. in extreme northern Allen County. He injected 50 watts into a quad at about 16′ as the high power fox, and employed the microprocessor based micro fox rig, running around 10 milliwatts, ensconced in a tree trunk, as the low power fox. Both emitted on 146.430 MHz.

The fox commenced transmitting promptly at 13:30 hours and produced extremely weak, but readable signals at the Safety Academy site indicating that the action was to the north, so to the north everyone proceeded. The Nardin team was following Kim & Jim up Coldwater Rd. way north of Dupont when it spotted Charles and crew buzzing rapidly south on Coldwater as if the Cap-N-Cork were passing out free cold beer samples.

Although we were thirsty and a cold beer sounded really good, we none-the-less continued north tracking the continuously improving fox signal level until we found the Cedar Creek Wildlife Sanctuary near an unmarked housing addition. It should be noted that the Cedar Creek Sanctuary turned out to be a sanctuary mainly for mosquitoes…thank goodness that Kim Machamer brought some bug spray.

As usual, aside from the mosquitoes, our presence attracted the local inhabitants who wondered “what the heck them city folks was up to?”, including one who got off his tractor to check us out, and ask if we were lost. Other curious neighbors peppered Robert with questions, and one curious fellow asked if we could track him if he was wearing a dog collar/transmitter. Linda offered to give it a try if he would agree to activate the zapper function on the collar. He declined.

With the aid of our just completed active attenuators, once on foot we located the micro-fox, ninety-five minutes (and 25.1 miles) into the hunt. We were followed by Jim & Kim one minute later (and 24.8 miles travelled), and then by Charles, Fred and Ben at 115 minutes (and 34.3 miles). Based upon elapsed time and distance travelled, it turns out that Kim & Jim were this month’s winners beating out our team by just one-half a point! So they will serve as the fox for the August competition.

Following conclusion of the hunt everyone buzzed over to Culver’s on Dupont to tend to their mosquito bites and to refuel.

Jim & Kim will decide from what location to commence the August hunt and what fox frequency to use, and will so notify interested parties in the near future. A photo of this month’s foxhunt participants will be posted on the club web page and probably in the next Allen County Ham News.

Statistics for this hunt and year-to-date are as follows: