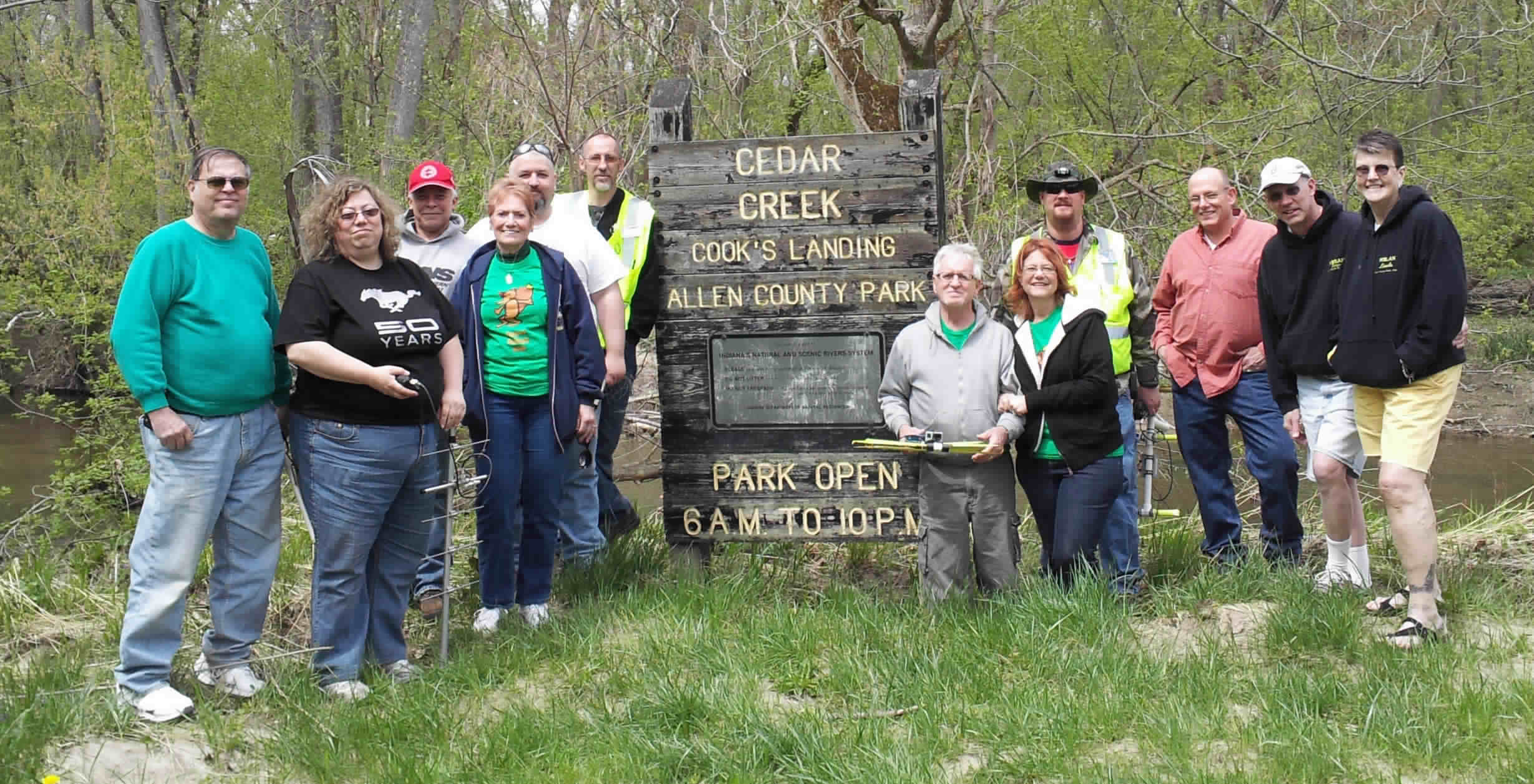 Well, May finally arrived, and with it the promise of more reasonable weather. About time after this last winter, ehhh? The local contingent of Allen County foxhunters, less the fox, gathered together at Krueger Park eager to start their quest for their elusive prey early Sunday afternoon on the 4th of May. This crew consisted of the team of Jim & Annie Pliett, K9OMA & KA9YYI plus Carole & Al Burke, WB9’s RUS & SSE, the team of Charles Ward, KC9MUT, Fred Gengnagle, KC9EZP and Phil Hooper, AB9IZ, the team of Kim & Jim Machamer, KB9’s DOS & DOT, and the team of Linda & Steve Nardin, W9’s LAN & SAN.

The role of the fox was played by Bob Dean, KC9UHU who was hid-out at Cook’s Landing Park on Cedar Creek at the corner of Shoaff and Coldwater roads. Bob was using a cubical quad driven with about 50 watts as the high power fox, and a microcontroller controlled microfox which emitted around 30 milliwatts. Both of these units radiated on 146.340 MHz, i.e., on the input to the 146.940 repeater. The microfox was attached to a tree branch about ten feet in the air.

The fox started warbling promptly at 13:30 hours and was immediately heard by all of the foxhunt teams at Kruger Park.

Everyone wasted no time taking off towards the north north-east. We seemed to get signals of increasing strength and generally consistent bearing with each reading. As we were busy taking readings we lost track of the fact that all of the other hunters separated from us and we were on our own. So we trusted our equipment and it duly led us to Cook’s Landing in short order. In fact, we were the first hunters to localize the fox hideout. As it turned out Annie, KA9YYI was the first to physically locate the microfox dangling from a tree branch about ten feet off the ground fifty one minutes into the hunt. Following her was the Ward, Gengnagle, Hooper team at sixty seven minutes, then the Nardins at seventy eight minutes, and finally the Machamers at eighty three minutes.

Based upon team mileage travelled (16.5 miles/Pliett/Burke, 15.7 miles/Ward/Gengnagle/Hooper, 20.7 miles/Machamer, and 21 miles/Nardin), along with the time-to-find results, the Pliett/Burke team were the winners of this hunt and thus will perform fox duties for the June contest. That hunt will start from Buckner Park (6114 Bass Rd.) on Sunday, 1 June, and we will use the input to the 146.88 machine (i.e., 146.288 MHz) as the fox frequency assuming we get permission from ACARTS. Mark that date on your calendar.

Following the hunt everyone proceeded to Culver’s on DuPont Rd. for a delicious chow-down. It was GOOD!

There should be a mug shot of the participants of this hunt available in the Ham News, and on the W9TE web page. (Don’t confuse it with pictures you might see in the Post Office).

Statistics for this hunt and year-to-date are as follows: