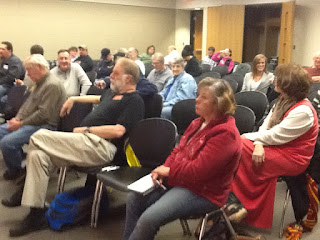 Warning Coordination Meteorologist Michael Lewis reminded spotters of the importance of their reports. He pointed out that studies have shown that members of the general public pay more attention to weather warnings when they include eyewitness reports. In other words, if a tornado warning says a spotter has seen a tornado on the ground, it’ll get a lot more response from the public than a possible tornado indicated by radar.

Twitter. Lewis said Twitter is not only the fastest way to get a report in front of meteorologists’ eyes; it’s also supported by software that automates the process of creating a local storm report (LSR). That means news media and emergency managers see it faster. To send a report via Twitter, include the “hash tag” #nwsiwx. If possible, attach a photo to the tweet.

Facebook. This is the second choice of the NWS. Lewis said it’s a bit slower than Twitter and requires manual retyping to create an LSR. “But it’s still pretty darn fast,” Lewis said. Another advantage of Facebook is that it archives photos and videos, making it easier for meteorologists to look at them after the event. To report via Facebook, Log into your Facebook account and go to the National Weather Service Northern Indiana Facebook page (www.facebook.com/US.NationalWeatherService.NorthernIN.gov). Click on “Write Post” and enter your report. If possible, include a photo.

SpotterNetwork.org. NWS likes this web-based spotter organization (www.spotternetwork.org), in part because it requires spotters to complete the organization’s own online independent study training before it accepts reports from them. Also, SpotterNetwork.org conducts quality assurance on reports and suspends people who make inappropriate reports. Michael says SpotterNetwork.org is fast but depends on the speed of the weather forecast office’s (WFO) Web connection, which can vary.

Amateur Radio. Lewis described amateur radio as “super-fast” but also described a significant issue: Volunteer operators are not always available to staff the amateur station at the WFO, WX9IWX. Also, meteorologists do not monitor the radio traffic; they wait for the volunteer operator to write down a report and hand it to them. Lewis urged amateur radio spotters to use one of the other methods whenever WX9IWX is not on the air.

CoCoRaHS. The Community Collaborative Rain, Hail and Snow Network (www.cocorahs.org) is a grassroots volunteer network of backyard weather observers who measure precipitation and report it via the Web. The network can also receive reports of severe weather. NWS has access to these reports and considers the speed of this reporting method to be comparable to amateur radio.

E-spotter. The NWS operates this web-based spotter reporting system (espotter.weather.gov) but not for much longer. Lewis said 2013 is probably the last year that E-spotter will be available. It’s running on a server that uses the outdated operating system MS-DOS!

Telephone. Lewis gave the audience the toll-free spotter hotline number (888-668-3344) but said the phone is far from an optimal way to make a report. In fact, he said spotters should consider the phone to be a last resort. He said the phone line can get swamped with calls and there can be a considerable delay getting out an LSR.

Email. NWS does not really consider email a reporting method, especially for urgent reports like tornadoes. Lewis said that accessing the email account, w-iwx.webmaster@noaa.gov is a burden to meteorologists, so the delay can be significant. It’s such a problem that Lewis advised spotters who send email to also call the WFO to alert it to look for the message.

So what does the IMO SKYWARN quadrant director recommend? Get a Twitter account and use it but also send every report on ham radio, so other spotters will hear it immediately. Twitter lets you send spotter reports from any cell phone that supports text messaging. And if you have a smartphone, you can shoot a photo and use a Twitter app to share the photo with the WFO. Of course, if you’re at an Internet-connected computer, you can use it to send a report via Twitter.

But remember, spotters who monitor our radio nets depend on hearing each others’ reports. So if you use another method to report, put it on the radio too. Just make sure the net control station knows you already sent it via another method.

Lewis presented the following new set of reporting criteria for 2013:

Hail, regardless of size. Lewis advised, however, that redundant hail reports (same size in a nearby location) are not particularly helpful. If you’re uncertain whether your report is redundant, send it anyway.

Measured wind speed greater than 50 mph. Lewis cautioned spotters to make sure they’ve calibrated their equipment. And he suggested referring to the Beaufort wind scale to see if the wind is doing damage consistent with the measured wind speed. If not, be suspicious of your anemometer.

Funnel Clouds or Tornados. Remember that rotation must be present with either feature. Also, do not report a tornado if you can’t see debris being lifted (for any reason … it might be a tornado but if you can’t see the debris because of a tree line, call it a funnel cloud).

Flooding. Don’t drive or wade into the water to measure its depth!

Those are highlights of this year’s training session. Feel free to contact w9lw@arrl.net with any questions.